We were planning field trips for the summer. It’s unusual for Marvin to make a request so I was taking his suggestion seriously. Usually he is content with letting me decide where we go.

“Tell me why you want to go there.”

“It’s the official State Waterfall for Washington… The falls are about 200 feet high… that’s seventeen feet higher than Niagara Falls… It’s geologically significant… the result of Missoula Floods… the Palouse river used to be tributary to the Columbia but now it’s tributary to the Snake River…  I’d like to take a few pictures.”

“You have done the research. Pack your camera gear and let’s go… are you going to bring your kayak? I’ll take your picture if you run the falls.”

“Nope… Tyler Bradt has already made that plunge and set the record… being second spoils the appeal for me… but it would be quite a ride.”

“The falls change height depending on the water flow… as much as 12 feet… so maybe you could pick a day when there is more water and reset the world record.”

“Rafa Ortiz tried that too… but he was disqualified because he didn’t stay in his kayak during the free fall portion. He didn’t try again… once was enough.”

“It helps to be young and skinny… no one will accuse either of us of that.”

“Do you know what “Palouse” means?”

“It’s what people now call the Native Americans that lived near there… In their journal Lewis and Clark called them ‘Pellotepellows’…  they were related to the Nez Perce and raised horses referred to as ‘a Palouse horse’… now Appaloosa.”

“Have you been to the geographical center of Oregon?”

Marvin’s question seemed innocently proposed but I knew better… he likes to use leading questions to start a conversation and it is likely that he already knows the answer. We were in Central Oregon, defined by three counties, Jefferson, Crook and Deschutes. We had passed through Jefferson County and now we were in Crook County, east of Prineville and headed toward Post and Paulina on SH 380. I suspected his question involved one those two communities so I decided to be indirect and answer with a question.

“I wonder how they calculate the center of a state… Oregon’s almost square so it would be easy to get a rough estimate by marking diagonals and see where they cross.”

“When I did that the diagonals crossed pretty close to Post,” replied Marvin.

In the past I did some computer based research. A U.S. Coast and Geodetic Survey (USCGS) put the center of Oregon about 16 miles south of Post, but not near any community. Although, in remote Oregon 16 miles is considered nearby… some ranches out there are bigger than that.

A Center of Gravity method put the center south of highway 20 in Deschutes County, a few miles from Millican, about 30 miles SW of Post, but Oscar Adams, the senior mathematician for USCGS, ridiculed the question and said there is no such thing as a geographical center of any state, country or continent. He claimed there was no exactitude in any of the methods used. “Make your own definition of center,” he said, “one is as good as another.”

Methinks he doth protest too much. He had a reputation for accuracy to uphold and he probably was embarrassed by telling people he couldn’t provide an exact answer.

I tried a more modern solution in reverse… I used Google Earth and put the center cross-hairs smack dab on Post, then zoomed out until I had the boundaries of Oregon on screen. With a little fudging  Post looked pretty good for the center of the state. Then I did a Google map search for “Oregon” and looked at the icon’s location… it’s a few miles east of Brothers, Deschutes County, about 25 miles south of Post, but still in Central Oregon.

Alfred Korzybski’s famous statement: “the map is not the territory” holds true… it is impossible to map a three-dimensional sphere onto two-dimensional paper without creating some area distortions, thus no exact center is possible. The map is the problem.

“Marvin, I’m hungry. Are you ready for lunch? I hear the store in Post makes an excellent meatloaf sandwich and I want one of those t-shirts that claim Post is the geographical center of Oregon.”

Ralph and I were talking about big trees and I knew at the mention of one he hadn’t seen he would be ready to travel so I dropped the hat.

My son, Chris; Lucy, the dog; Ralph, the tree guy; and me, the camera guy… loaded our gear into my Chevy Blazer and we were off to Eastern Oregon’s Strawberry Mountain Wilderness Area to measure and photograph what I hoped would be the largest Tamarack tree in Oregon, perhaps it could even be the national champion.

I saw the tree while looking for butterflies during a field trip and marveled at its size. It was the biggest Tamarack I had ever seen. Now we were going to see if it measured up, officially. Ralph was the certification expert. He called the tree a Western Larch… and I discovered “Tamarack” is the common name for the Eastern Larch.

Somehow the “Tamarack” name had also been given to the Western Larch. “Tamarack” made sense to me because to me they looked very much alike… same genus… but different species… and different scientific names. A botanist would reference the Western Larch in writing as “Larix occidentalis” and the Eastern Larch as “Larix laricina.” To be technically correct the authority’s name would be appended after the genus and species but not italicized… technically correct is mainly used in botanical journals but purists will also append authority names.

Unfortunately, my tree wasn’t big enough to be crowned the new champion. In Ralph’s words: “We saw the tree, and it was a marvel to behold, but a champion to dethrone another it was not.”

How big is the champion? According to Wikipedia the national champ is 153 feet tall and 22 feet around (seven feet diameter). It can be found near Seeley Lake, Montana. Locals refer to the tree as “Gus.”

How big was mine? 120 feet tall and 13.5 feet circumference (four feet, three and a half inches diameter). My tree was taller but not big enough in circumference to surpass the Oregon champion. I would have to settle for the biggest Western Larch I have ever seen.

July 16, 2014: “I want to spend some time looking at the trees on Wizard Island,” said Ralph, “and there are two record trees in the Park that were originally measured during the 1940’s that need to be remeasured and certified. With luck we can do both.”

Ralph brought a tent. We both brought a sleeping bag. We were prepared to camp out.

Did we have reservations?

It did not occur to us we would need reservations. We were surprised to find an overflow crowd at Crater Lake. Not only were no camping sites available but the Wizard Island tour would be space available.

The reservation system was down… crashed… so we had no idea how many people would show up for the tour. Nor could we risk staying on the island and taking the next boat back to shore. The next boat might be full… all the next boats might be full. We elected to look for the two “lost” trees and skip the time-limited island tour.

We had “approximate” locations for the two trees. The Park Historian was some help… he had also looked for the trees but was unable to locate them. His trials eliminated some possibilities for us though.

One of the trees was next to the road and we found it quickly, before evening set in we had measurements and photos.

We had to leave the park and find a campsite somewhere in the adjacent National Forest. We were lucky to find an abandoned hunter’s camp where we set up the tent and spent the night without noisy neighbors. The noisy mosquitoes were another unanticipated problem. Eventually sleep prevailed.

The next morning, we looked for the other tree. We estimated the other tree was about two miles off road, downhill, and near where a couple small streams came together. I plotted coordinates to use with my GPS and we began the search.

Fortunately, an abandoned power line gave us a good trail to follow and walking was easy… downhill. When we passed two and a half miles we turned around and worked our way back. Ralph spotted a couple trees he wanted to measure but I was quickly running out of steam going uphill. The combination of elevation, sunshine and uphill was turning hiking into hard work. The two and a half miles down was more like ten miles going uphill.

I elected to take a rest stop while Ralph investigated trees. While he was gone I decided it would be a good idea to continue, slowly, and let Ralph catch up to me. That strategy would reduce the time spent on the return trip and my rest stops wouldn’t be an issue.

Ralph was worried about having missed me on the trail. He thought I intended to wait for his return. I worried about him… he had the keys to the car. When we got back together at the car we reviewed our hiking strategy to make sure we both understood what the other was planning to do.

I love when a plan comes together.

June 21, 2012: “How old is this rock,” I asked Marvin, indicating a piece of quartzite I had picked up while we were visiting Steptoe Butte State Park in the Palouse Hills of Washington, not far from the town of Colfax.

“Oh… you read the interpretive sign too,” I replied.

“Yes, but the age is debatable. Dr. E. K. Peter, professor of Geology at WSU, said it was over a billion years old. Other sources say radiometric dating placed the age between 1.4 and 1.47 billion years old. We’re standing on an old pile of sand.”

“Well… then it’s also true that it’s over 400 million years old. So, the sign isn’t wrong even if it is misleading. Dr. Peter isn’t wrong either… he is just a bit conservative if we believe the radiometric dating numbers.”

“Nice view from up here,” Marvin said, changing the subject. “How far do you think you can see?”

“The mountain identifier said Mount Spokane is 70 miles away.” 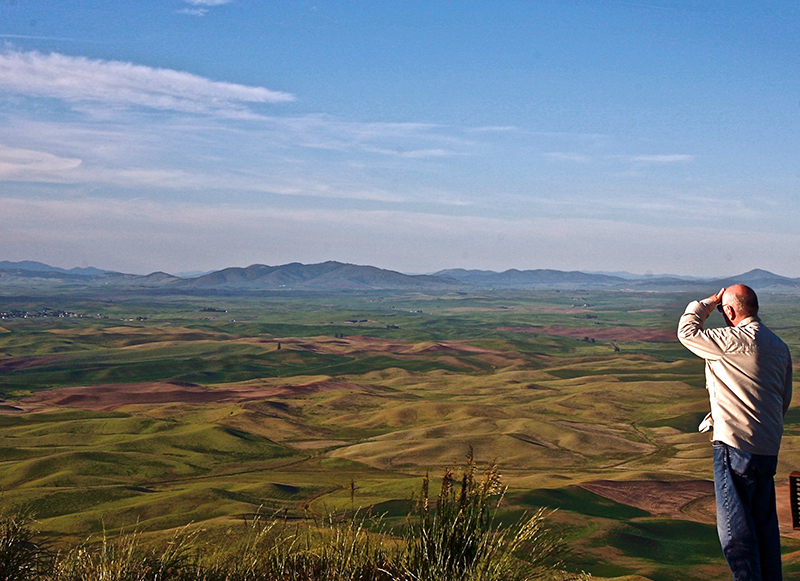 “I don’t know your minister very  well but I think she would like it… There’s a guy setting up a parasail… maybe we can get some shots of that… his kite is colorful… it will add some color to the photo.” 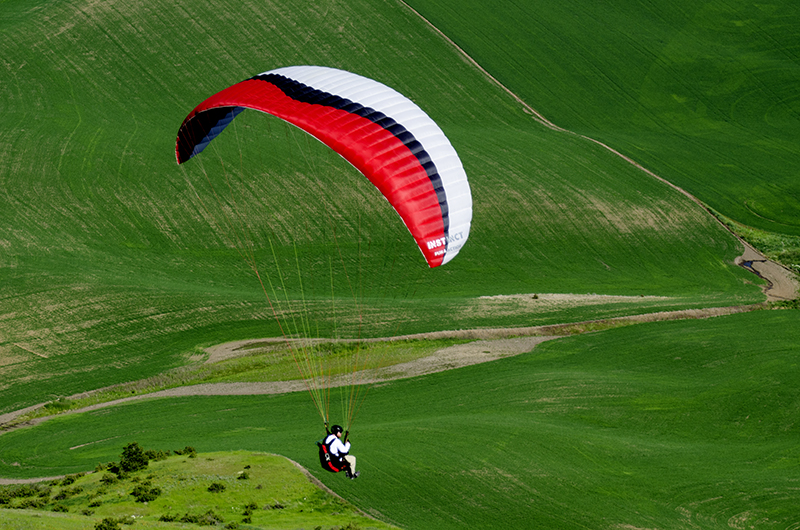